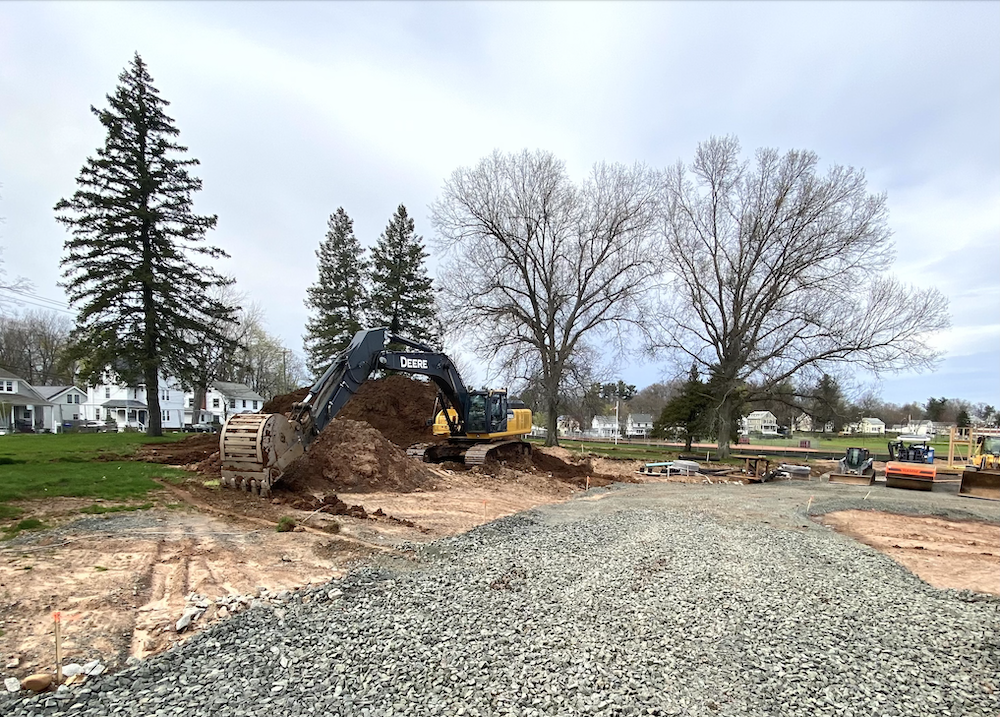 The neighborhood kindergarten (NPS), an on-campus playful daycare center, will have its two current buildings at 115 High Avenue and 20 Lawn Avenue demolished this fall due to the construction of the new science building. The two sites will be consolidated into a new building, designed by Patriquin Architects of New Haven, at 60 Long Lane by the end of 2022. The new facility is currently under construction following the start of construction in December 2021.

The new location will allow the NPS, which currently has 10 teachers for 47 children in the two current facilities, to increase both its number of teachers and students to 13 and 52 respectively. The new facility, which will be approximately 7,000 square feet, will also be significantly larger than the current two buildings. In addition, 65 parking spaces have been proposed for the new building, including 52 for faculty and staff and 13 for curbside parent drop-off and pickup.

Since 1989, when the University invited NPS to run an on-campus daycare, NPS has an ongoing relationship with Wesleyanincluding prioritizing the admission of children of Wesleyan employees and students. More than half of students at the two current sites are from Wesleyan-affiliated families. In addition to a contract with the NPS that is renegotiated every five years, the University has a voting member on the NPS Board of Trustees, and the NPS uses spaces on campus for certain events.

According to University President Michael Roth ’78, the need to move the two sites will lead to the creation of a better facility for the NPS.

“Part of the new science building project means we have to move the preschool, which gives us the opportunity to build a much better and more appropriate facility,” Roth said. “And it’s happening in Long Lane right now.”

In addition to strengthening the facility overall, it is hoped that the relocation will better serve the NPS community.

“We would much rather have all of our classrooms in one building so that our community is together,” NPS director Suzanne Donnelly wrote in an email to The Argus. “Our building committee consisted of a Wesleyan representative[resentative]s, architects, parents and NPS staff. We were able to [meet] our wants and needs for each program. We are very excited and can’t wait to move in!

Project plans have been officially submitted to the Middletown Planning and Zoning Commission (PZC) on Friday July 2, 2021 and was approved on Wednesday July 14, 2021. During a virtual hearing with the PZC held on August 11, 2021, project manager Angela Wong emphasized that the preschool environment reflects the learning philosophy of NPS.

“[The new location is] a vast field of greenery, allowing children to explore the outdoors, in line with the play and nature-based philosophy of the neighborhood preschool,” Wong said during the hearing.

Several environmental benefits are anticipated for the new facility, which will be constructed and positioned to maximize solar exposure and reduce heating energy in winter. Additionally, the new location will have a large open outdoor play area and three play structures, which will be transferred from the two current preschool locations.

“The design team is mindful of using child-friendly and environmentally friendly materials to create a healthy building with plenty of natural light,” Wong said during the hearing. “The new daycare will also combine toddlers with preschoolers, younger children with older children under one roof, which tends to be a developmentally rewarding experience.”

Not only is the new location more centralized, but the building is also specifically designed as a daycare center. The current NPS facilities were originally built as residential accommodation and have been adapted to serve as preschools.

During the hearing, Wong explained the benefits of moving to a new centralized location.

“By combining the two centers into one new building, operations and services are optimized,” Wong said. “All teachers will now be grouped together in one building to allow for easier collaboration.”

Donnelly explained that she was looking forward to continuing to teach in a new location and wanted the NPS to maintain its teaching philosophy.

“I don’t think there are any downsides,” Donnelly wrote. “Some people may miss ‘home’ as the feeling or memories of [original] buildings, but we plan to keep the same NPS philosophy and we are more than excited about this new journey.

“The people who work there are great into it, and they have a scale model of what they’re building, so when little kids walk by they can see it,” Roth said. “It’s very exciting and it will be a great facility, much nicer than where they are now, much more appropriate as a modern kindergarten.”

Cameron Ryan can be contacted at [email protected]