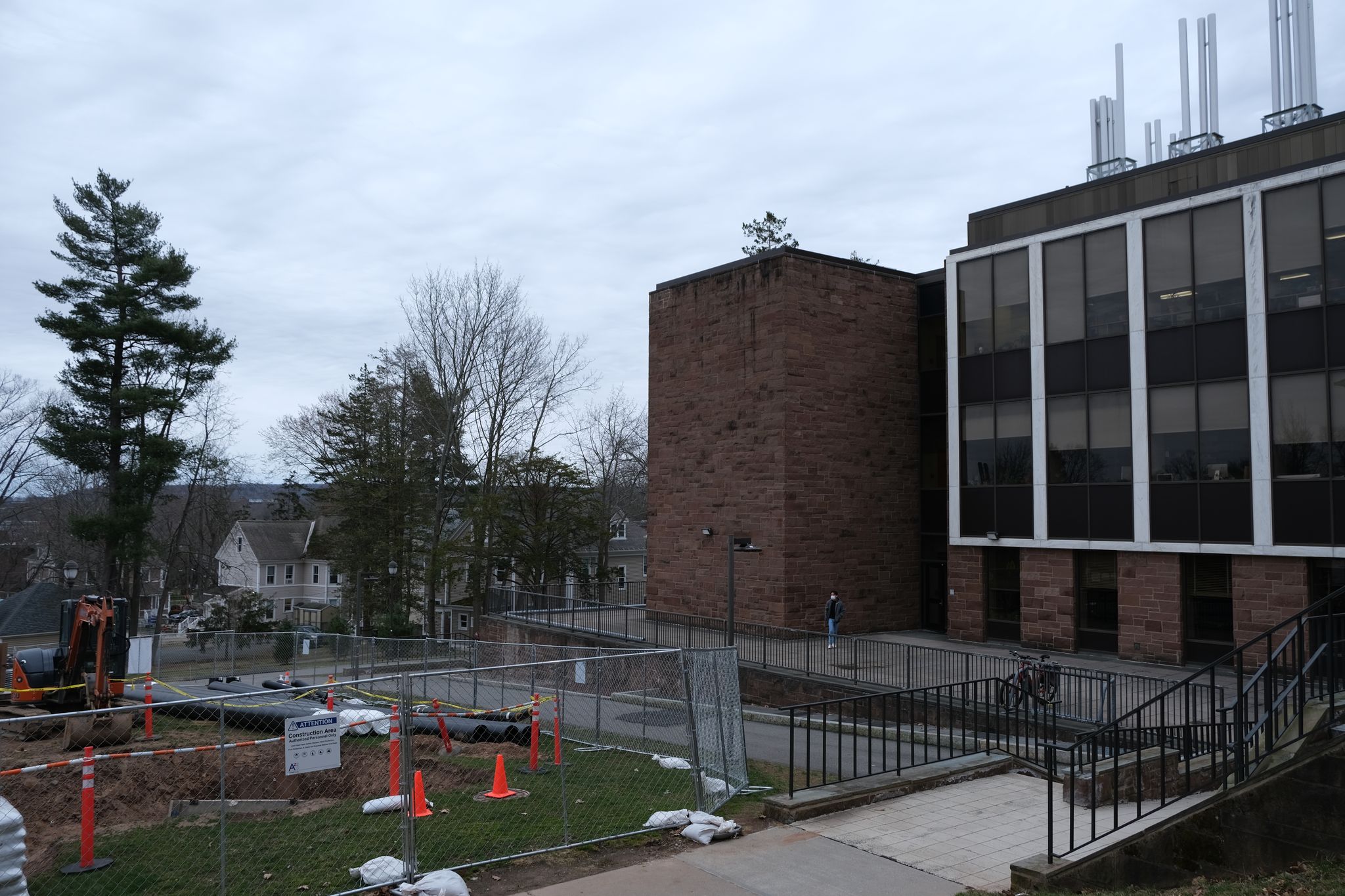 By James G. WarfieldApril 8, 2022No Comments

The Hall-Atwater laboratory building sometimes looks like a maze of windowless corridors. Elevators are difficult to locate, and only one of the building’s three entrances has a power-operated door and is fully wheelchair accessible. Beginning in late 2022 and ending in late 2025, the University will construct a new building to replace Hall-Atwater. Its design aims to be physically accessible, to make scientific work inviting, and to create common spaces where all students feel welcome to study.

When the new science building is completed, laboratory equipment will be moved from Hall-Atwater, which will be demolished. Equipment will also be transferred from Shanklin Laboratories, which currently houses numerous biology and molecular biology and biochemistry laboratories. Shanklin will be retired as a wet lab space, but will be renovated in 2026 and 2027 to become home to the College of the Environment and the College of Integrative Sciences.

Payette, the architecture firm hired by the University to plan the new science building, met with a committee of students and staff to find out what they wanted in the building and how the design could support diversity , equity and inclusion. Committee members emphasized both physical accessibility and creating a welcoming environment.

“[People wanted] that feeling of invitation,” Payette manager Mark Oldham said. “Obviously, [they wanted] the reality of the invitation, the… lack of barriers to facilitate progress in the project, but there was also the feeling that if I wasn’t part of the sciences, I should feel like I was invited.

The layout of the new building will be open, with blocks of laboratory space on each floor surrounding a central area with seating. Associate Professor of Biology Ruth Johnson compared this to the Hall-Atwater building, which has only a few places for students to congregate.

“There are these nooks and crannies where I see students congregating,” Johnson said. “I love seeing undergrads in these little groups, but there aren’t enough of them in Hall-Atwater.

The Hall-Atwater and Shanklin labs are in separate rooms, but the new building will feature adjacent lab blocks separated only by sliding glass doors. In addition to wet lab equipment, the blocks will include a shared “writing space” where students can sit and work. These spaces will have kitchenettes, whiteboards, desks, and other easy-to-move furniture.

“I’m in Professor Johnson’s lab at the moment, and I never see any [people from other labs]“, Chen said.”[I’m] I don’t really talk to them at all, so I don’t know who they are, what they’re working on. I think [the new building’s] the spaces are very conducive to this kind of collaboration.

However, Jessica Luu ’24, who works in Associate Professor of Chemistry Michelle Personick’s lab, was concerned about security, as multiple labs will be accessed through the same locked door and chemicals from different labs will be stored quite close together. one another.

“There are safety concerns about many people having access to the same space and having just a ton of chemicals in the same space,” Luu said. “I know one of the contractors said it would be easier for people to respond if there was a chemical accident, but also, there’s even more chance of accidents.”

The labs are designed to display science and research, with glass walls to make the interior of the labs visible from common areas and hallways. The hallways will also be lined with posters summarizing recent research.

“It has to be a scientific community, not a group of isolated cells,” Oldham said. “You will be able to walk through the building and, by osmosis, understand [what’s going on].”

The architects had originally planned to make the laboratory walls entirely of transparent glass. However, students and faculty said it might look too exposed, so Payette decided to intersperse the glass with opaque segments. Michael Quinteros ’24 was part of a student panel that saw both iterations of the design.

“I was a little worried at first when they showed that the [lab] wall was made entirely of windows,” Quinteros said. “I think it’s really good that they listened to the students and reduced the windows to the front.”

However, Caroline Pitton ’22 thought the visibility of lab spaces might still be difficult to adjust.

“I work in the admissions office, and I imagine that once the building is completed, the tour route will go through the building,” Pitton said. “From a sales perspective, it’s really cool to be like… ‘There are people doing science, and you can see them,’ but from a student perspective…you you’re in a zoo a bit.”

In addition to fostering community, the building is designed to be more accessible to wheelchair users than Hall-Atwater.

“Right now Hall-Atwater has these physical barriers of steps and stairs and elevators, and it’s very uncomfortable for… someone in a wheelchair or [with a] mobility challenge,” said Oldham.

The principle of universal design – minimizing the need for people with reduced mobility to use separate routes and equipment – ​​has shaped the planning process. Ramps, doors that open automatically and height-adjustable desks will be standard throughout the building.

The architects also said the elevators would be visible even at oblique angles from the ends of the hallways. They plan to accent them with materials not used anywhere else in the building. However, Administrative Assistant for Molecular Biology and Biochemistry and the College of Integrative Sciences Anika Dane pointed out that the focal point of the building, a large central staircase, could seem excluding wheelchair users.

“A giant staircase that swirls down the center of the building…it’s very pretty, but if you’re in a wheelchair, you don’t really feel welcome by this building,” Dane said. “[They] build a building for walking people. 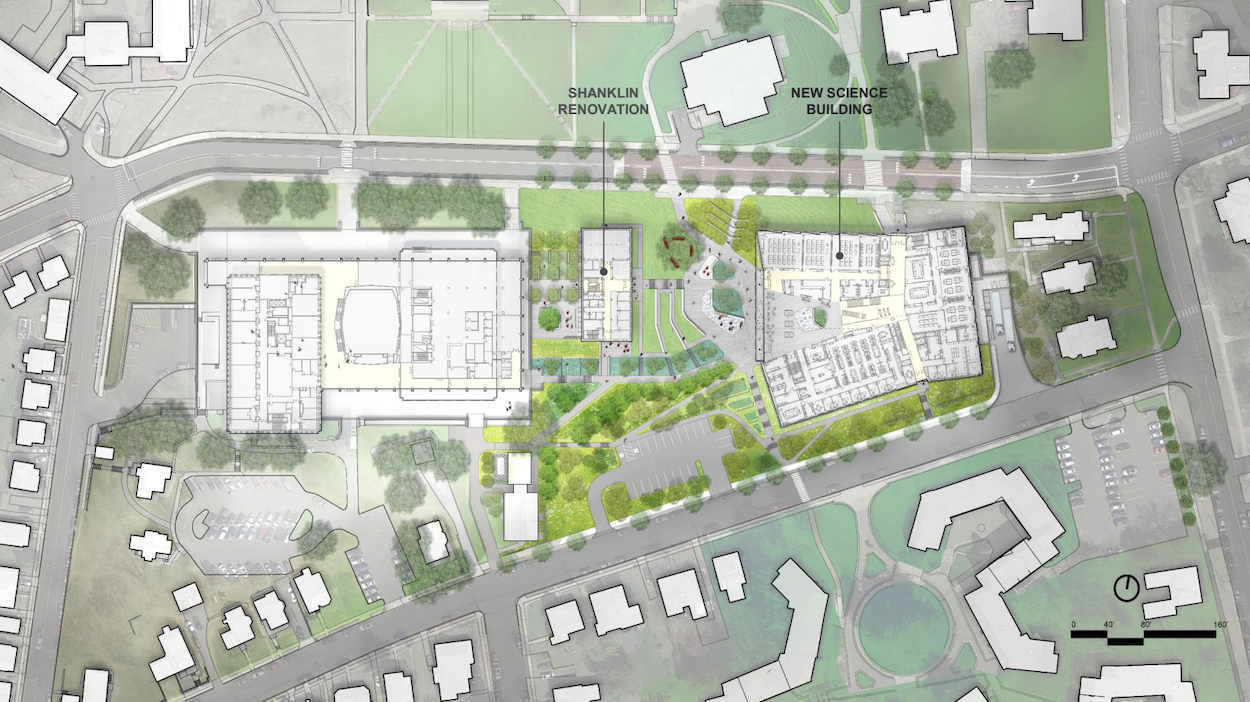 Students were also disappointed that the new building was not connected to Exley by an interior walkway, as Hall-Atwater currently is. The planning team decided that adding a tunnel between the buildings would not be worth its $1.5 million cost. Luu said she often brings Hall-Atwater samples to Exley’s scanning electron microscope, and walking outside to get there can be inconvenient.

Overall, however, the new building is designed to be easier to navigate than Hall-Atwater.

“[Hall-Atwater is] very uncomfortable for the vast majority of users as it is difficult to find your way around,” Oldham said. “It’s a rabbit hole. It is a very inaccessible and uninviting experience.

The entire west wall of the new building will be glass, and the architects hope this source of natural light, visible from most hallways, will help students orient themselves. The wall will have two layers, placed three feet apart, to provide insulation.

Digital signage in the new building could also help with orientation. Dane said when office locations change in Hall-Atwater, she has to modify the paper maps that are displayed, and she hopes the new building’s electronic signs will be easier to update. Screens throughout the new science building will also display conference room and seminar room booking statuses to indicate available space.

Dean for Academic Advancement Laura Patey mentioned that in addition to improving navigation, the layout of the building could help make testing fairer. Some students need a distraction-free environment, so they take exams in smaller spaces while their classmates are in a large room. The new building will have small lecture halls located close to the lecture halls, so students with exam accommodations will have easy access to faculty members during exams.

The washrooms were also designed with inclusiveness in mind. After extensive discussion with students and faculty, the architects decided to create communal bathrooms for all genders, with single-use toilets also available for those who are more comfortable with them.

While these features can pave the way for inclusivity and collaboration, Johnson stressed that what ultimately matters is how people act.

“Ultimately, it’s the people who inhabit that building who will hopefully then react to that environment,” Johnson said. “It’s really up to people to make it welcoming or not.”

Anne Kiely can be reached at [email protected].