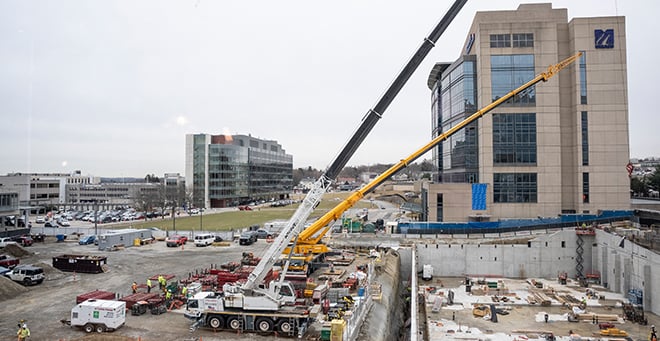 The new Teaching and Research Building under construction on the Worcester campus of UMass Chan Medical School will begin to take shape on March 14 with the start of structural steel erection.

Precisely 5,873 steel beams and columns will be craned into place, then welded and bolted together to form the skeleton of the nine-story building. In total, the building’s structural steel weighs 3,295 tons.

“This is an exciting step to take as people will see the scale of this project as the steel goes up,” said John Baker, Deputy Executive Vice Chancellor for Facilities. “We’ve been working on this for a year and a half, with huge amounts of work completed to reach this moment, but most of it has been underground and behind the fence. Now people will have a visual idea of ​​the impact this building will have on campus.

The steel will be placed by two crawler lattice boom cranes which are significantly larger than the telescopic hydraulic cranes used on the project so far. The first crawler crane is scheduled to arrive on March 12, delivered on flatbed semi-trailer trucks and then assembled on site. A second crane will arrive at the end of April, doubling the steel laying capacity.

Each crawler crane’s lifting boom will be 407ft high and will be able to fold in on itself like a knife to be placed in a secure ‘studded’ position when not in use, typically on weekends .

The rear of each crane will be equipped with 28,400 pounds of counterweights, allowing it to lift and swing loads of up to 9,690 pounds within an 85-foot working radius.

Also starting the week of March 14, parking will be restricted to the top floor of the west garage closest to the construction site to create a safety buffer zone while the steel is being put in place.

Weather monitoring is an important part of the safety plan developed for the project, Baker said. The cranes will stop lifting and be placed in peak position during sustained winds of 35 miles per hour. If the wind speed increases to 40 miles per hour, the crane booms should be laid flat.

The roof of the new building will be 184 feet above street level. Mechanical equipment on the roof adds 15 feet to the overall height. The steel work will continue for approximately three to four months and will be followed by a closing ceremony celebrating the placement of the last piece of structural steel, tentatively scheduled for late summer.

The new building is in the center of campus, between the Aaron Lazare Research Building and the Albert Sherman Center. It will expand on-campus research space to accommodate approximately 77 principal investigators and add teaching and conference space to support the missions of the three schools.

Structural steel is fabricated by Beauce Atlas Inc. and will be erected by James F. Stearns Company. Shawmut Design and Construction is the prime contractor for the project. ARC, the same firm that designed the Sherman Center, is the official architect of the new building.