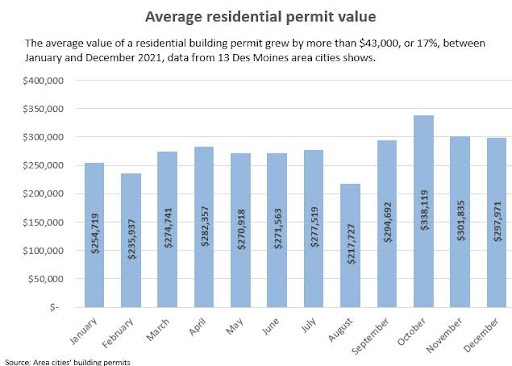 By James G. WarfieldFebruary 4, 2022No Comments

The average value of a residential building permit in the Des Moines area increased by more than $43,000, or 17%, between January and December 2021, illustrating the effect of soaring material prices and demand of new housing on costs.

Material costs are expected to rise in the coming year, crowding out people who want to buy a newly built home from the new-build market due to the expense. Rather than buying new homes, people are staying put, keeping their existing homes out of the sale market and further limiting the supply of homes for sale, local experts say.

“We want to be able to get back to a point where [teachers, firefighters, police officers] can afford to move into a new construction home,” said Dan Knoup, executive director of the Home Builders Association of Greater Des Moines. “We really have to find a way to reduce the costs of a lot of things. This is the price of wood. This is the price of petroleum-based products. It was the supply chain issues that got worse. 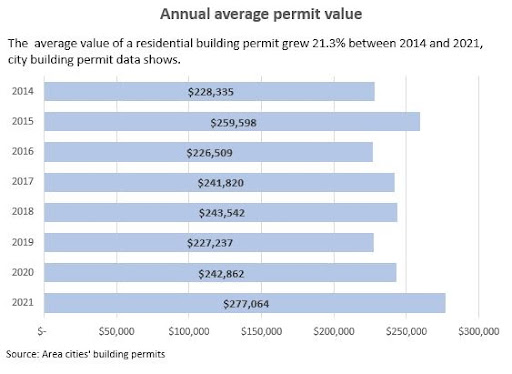 In 2018, Destiny Homes created a line of homes that middle-income earners could afford, Wade Hiner said in December, during Business Record’s Project515 discussion on affordable housing. The homes, including the lot, sold for $195,000. Four years later, the same house costs at least $295,000, he said.

“Every time the price goes up, we lose hundreds of people who could have potentially bought a new home,” said Hiner, president of sales and marketing at Destiny Homes.

According to Association of structural building components, the producer price index for lumber has risen 44.5% since September. The prices of other materials also continued to climb. In addition, obtaining certain products is becoming more and more difficult.

“Right now we have to order windows in 20 weeks,” said Jenna Kimberley, president of the Des Moines Home Builders Association and vice president of Kimberley Development at Ankeny. “It’s just crazy to think that you have to order your windows almost six months before you need them. Our suppliers don’t see this stopping anytime soon.

But even with rising prices, buyers are still in the new market.

In 2021, Kimberley Development sold $42 million worth of new homes, Kimberley said. Before the end of the year, the company had signed contracts totaling more than $32 million for custom homes to be built in 2022.

“Having about half of our year already inked and on the books before the year even started… that’s almost unheard of,” Kimberley said. “A lot of other builders are going through the same thing. … Our inventory is down. Days on the market are down. We don’t think we’ll see a slowdown in 2022.”