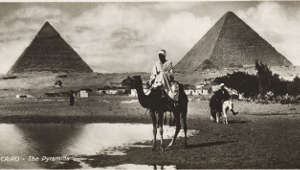 By James G. WarfieldSeptember 2, 2022No Comments

Archaeologists have long suspected that an ancient arm of the Nile, known as the Khufu branch, served as an important route for transporting goods to enable the construction of the Giza pyramids around 4,500 years ago. However, little is known about the evolution of this stretch of river.

Now, a team of researchers from France, Egypt and China has obtained a more detailed history of the Khufu branch by studying fossilized pollen grains extracted from five sediment cores drilled in the floodplain east of the complex. of the Pyramids.

Analysis of pollen grains allowed the team to track the emergence and disappearance of more than 60 different plants, including aquatic species, such as papyrus and sedge, and terrestrial species, such as date palm, palm , cereals and ferns. From this data, they were able to infer the rise and fall of water levels in the Khufu branch over a period of 8,000 years.

They found that the waters of the Khufu branch rose significantly during the African Wet Period, 14,800 to 5,500 years ago. The Khufu branch remained at a high water level for some time after this period during the reigns of Khufu (2589 to 2566 BCE), Khafre (c.2570 BCE) and Menkaure (c.2530 BCE ), facilitating the transportation of building materials to the Giza Pyramid Complex.

It is believed that the water level gradually decreased after the reign of King Tutankhamun (1349 to 1338 BCE). This fall correlates with earlier evidence of chemical markers in the teeth and bones of Egyptian mummies that suggest a drier environmental period.

“Our 8,000-year-old reconstruction of the Khufu Branch levels improves understanding of river landscapes at the time of the construction of the Giza pyramid complex,” says environmental geographer Hader Sheisha, from Aix-Marseille University. , in France. “It demonstrates that Old Kingdom engineers exploited the fluvial environment – ​​the Nile and its annual floods – to exploit the plateau area overlooking the floodplain for monumental construction.”

Sheisha adds that similar approaches used in the study could help reconstruct ancient waterscapes that lined other Egyptian pyramid complexes, such as the pyramids of Saqqara and Dahshur south of Giza.

While such reconstructions may indicate how building materials may have been transported, there are ongoing debates about how the massive blocks were placed on top of each other. The Great Pyramid of Giza was initially 146.6 meters high and consisted of over 2.3 million blocks of stone weighing 6 million tons in total.