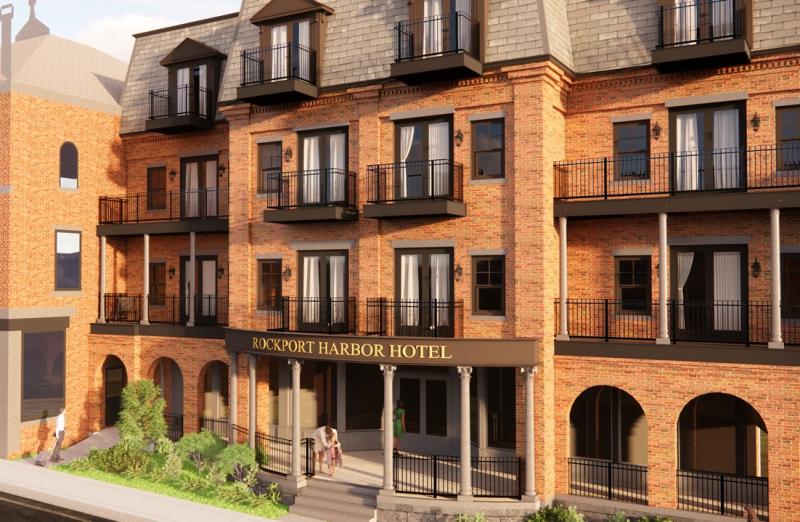 Rockport Harbor Hotel back to construction with new building permit

ROCKPORT — It’s been a three-month pause in construction, but on April 1, the Rockport Code Enforcement Officer re-issued a permit to 20 Central Street LLC, the company that’s building a 20-room hotel in Rockport Village.

“We are excited to take over the project and specifically finish the front facade, sidewalk and street so they can be used normally again this summer,” said Tyler Smith, Principal of 20 Central Street LLC. “The small amount of exterior work (brick, granite and slate) on the roof will begin immediately as well as the framing of the interior walls. We have approximately one year of interior work to complete and we still plan to open in the spring of 2023.”

Stuart Smith, also a director of 20 Central LLC, hoped to resume work on the site a month ago, but the city has been methodical in interpreting court rulings following ongoing lawsuits filed by residents of Rockport against the plans and construction of the hotel.

Tyler Smith said work will slowly resume over the next two weeks once schedules are established with subcontractors whose work ended on January 4.

A previous building permit issued by Rockport had been overturned by Knox County Superior Court Judge Bruce Mallonee pending another review by the Rockport Planning Board of the hotel’s parking issues, issues raised regarding the number of rooms allowed in the hotel, the aesthetics of the design and the guideline. for a traffic study.

The Planning Board completed its review in late January and reaffirmed its decision that plans for the new Rockport Harbor Hotel met municipal architectural standards and met parking requirements.

In March, the traffic study required, as produced by private company Gorrill Palmer engineers, raised concerns about the safety of the offsite parking system and advised 20 Central LLC to apply to the Maine Department of Transportation for an entry permit.

The off-site satellite parking lot at 310 Commercial Street for the hotel is part of the Old Hoboken Gardens on Route 1 near the Pascal Avenue intersection.

Gorrill Palmer had also suggested that 20 Central provide a parking lot and Route 1 access design that meets city standards, if the DOT did not require a permit.

In the April 1 building permit, Bickford wrote that he had determined that the parking facilities were adequate for the proposed uses, “and will not cause undue loads on nearby traffic or parking and cause Safety because: Parking for the Project consists of dedicated parking spaces and MDOT permits referenced in Gorrill Palmer’s Traffic and Parking Study have been obtained by the applicant.”

Bickford has issued a new planning permit on the condition that a certificate of occupancy will not be issued for the hotel until all remaining requirements, if any, regarding the use and landscaping of the satellite parking lot at 310 Commercial Street (Hoboken) be processed.

Tyler Smith said: ‘The lawsuit argued that the hotel was not visually harmonious with the surrounding buildings. After three months of extensive review of the building, application materials and ordinance requirements, the Planning Board again unanimously concluded that the architecture of the building is visually harmonious and complements the other buildings in the center- town of Rockport. We hope the Friends of Rockport have seen that their arguments have been heard and weighed fairly by the court and the city and that they will eventually be true friends and stop spending the city’s (taxpayer) money.