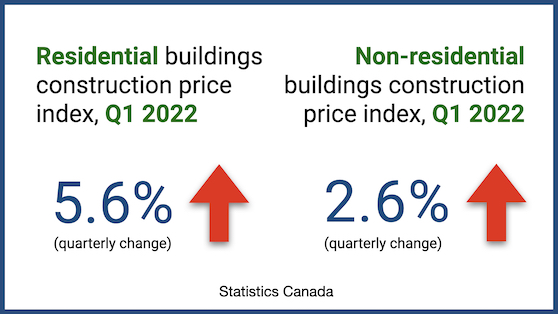 June 10, 2022 – Statscan reports that prices for electrical products continued to climb in the first quarter of 2022, with electrical safety and security systems seeing historically strong quarterly price growth. These higher prices had a particular impact on the construction costs of schools and factories.

Contractors surveyed attributed some of the growth in building construction costs to rising labor costs, and an increase in vacancies in construction trades contributed to higher wages in these professions.

Additionally, amid rising fuel prices, contractors reported that more of their spending was now allocated to transporting their construction materials.

Increases in construction of non-residential buildings costs continued to slow or stabilize in most census metropolitan areas (CMAs)* covered by the survey. Higher non-residential construction costs remained largely driven by continued growth in prices for structural metal products, which were impacted by supply chain constraints.

St. John’s (+1.0%) had the smallest quarterly price increase, followed closely by Moncton (+1.2%). St. John’s posted its smallest increase since the fourth quarter of 2020.

On the residential side, Growth in building construction costs accelerated in the first quarter of 2022, after moderating in the previous two quarters. The majority of the 11 CMAs covered by Statscan’s survey recorded larger quarterly increases than in the previous two quarters. The increase in residential construction costs was largely attributable to the rebound in softwood lumber prices.

Moncton (+2.1%) and St. John’s (+3.0%) recorded the smallest quarterly price increases in residential building construction in the first quarter of 2022. St. John’s and Montreal both saw a deceleration in price growth compared to the previous quarter.