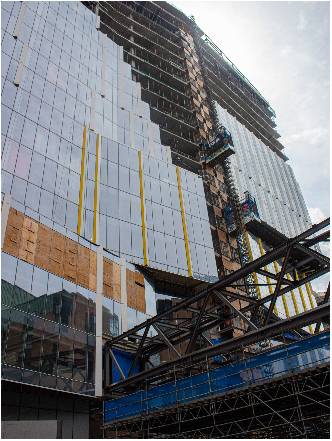 By James G. WarfieldOctober 19, 2022No Comments

PCL Construction’s Toronto office hosted a Beam Signing Ceremony, alongside the Hospital for Sick Children (SickKids) and B+H Architects, to celebrate the completion of the new Patient Support Center (PSC) of the hospital.

The crowning is a construction stage reached when the structure of a building reaches its maximum height. The PSC is a 22-story training, education and administration tower proposed as part of the hospital’s Horizon project. Project Horizon is a campus redevelopment project that includes new construction and renovations to bring the pediatric care hospital, built in 1875, up to speed with the future.

PCL took control of the PSC site over two years ago and officially opened in October 2019. During the two years of structural construction of the PSC, more than 25,000 m3 (882,000 cu ft) of concrete – enough to build a standard sidewalk between SickKids and the city of Peterborough – was used, along with approximately 2,458 tonnes (2,458,000 kg) of rebar. The construction deadline for the building is set at 2023. The other partners in the project are the vertical transport consultant, KJA Consultants; structural engineer, Intuitive; mechanical contractor, The Mitchell Partnership; and electrical contractor, Mulvey & Banani.

“We are extremely proud to celebrate this monumental moment alongside SickKids, the SickKids Foundation, our partners and the hundreds of tradespeople who have played a vital role in bringing this project to fruition,” said Monique Buckberger, vice -President and District Director of PCL Toronto. “Completing the patient support center is much more than a construction step. This is a representation of each team member’s personal connection to SickKids, and our shared passion and drive to deliver this impactful project for the community.

“Working alongside SickKids to create a forward-thinking environment that is firmly rooted in its community and a distinct new addition to Toronto’s urban fabric has been a hugely rewarding experience,” said Patrick Fejer, CEO of B+H . “It was critical to SickKids that considerations for staff and learner well-being were incorporated into every design decision from the outset. Too often in workplace design these needs take a back seat, but with the new PSC we want to demonstrate that when you put the well-being of the end user first, they are empowered to do their better.