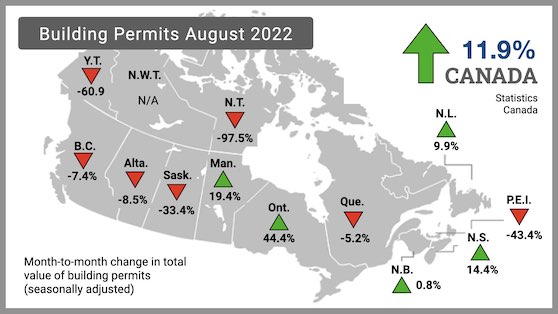 October 15, 2022 – Statscan reports that the total value of building permits in Canada rose 11.9% in August 2022 to $12.5 billion in residential and non-residential components.

The construction intentions in the single family homes component rose slightly by 0.4%.

The value of building permits in the multi-family component rose 22.2% — again, largely due to Ontario (+85.3%). A $480 million permit for a luxury skyscraper in Toronto, along with several other permits for apartments, resulted in the highest monthly value on record for that province.

The total value of the permit non-residential sector rose 11.8% to $4.0 billion in August.

The value of building permits in the industrial component rebounded with an increase of 18.1%. Saskatchewan rose sharply by 77.7%, with three permits worth more than $5 million. Nova Scotia also saw a notable increase with a variety of small permits.

Institutional license values ​​rose sharply by 39.1%, mainly due to Ontario (+224.2%). Permits for a new school in Hamilton and a new building for George Brown College in Toronto drove much of the increase.

The construction intentions in the commercial component decreased by 1.4%, mainly due to Alberta and Saskatchewan. Conversely, Manitoba saw notable growth in August due to a $50 million permit for an office building in Winnipeg.