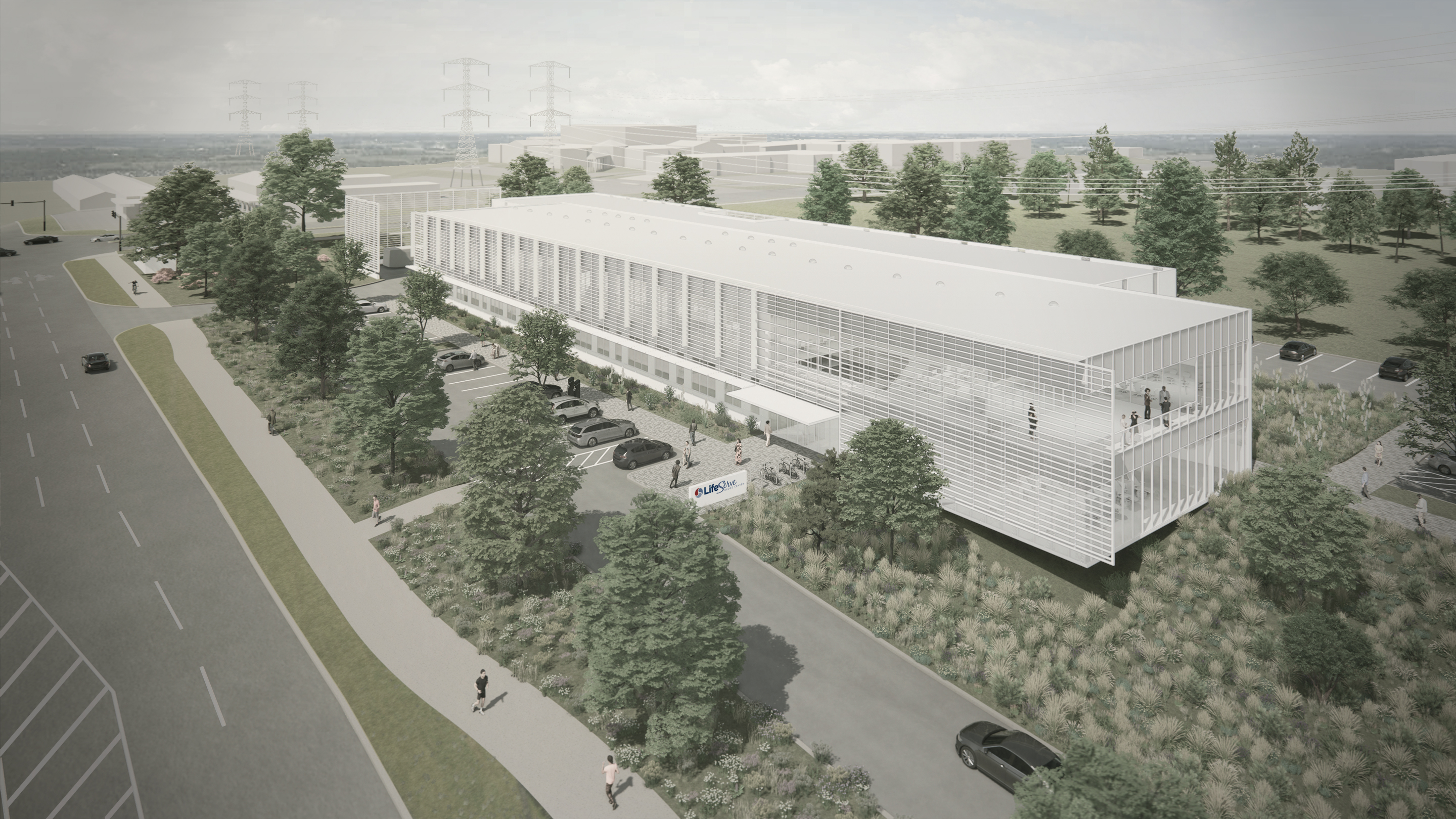 The size and shape of the new LifeServe Blood Center headquarters in Johnston has been determined. However, the construction materials that will be used on the exterior of the building have yet to be decided due to supply chain issues. The new headquarters will be nestled among mature trees located on the property at the northeast corner of Merle Hay Road and Johnston Drive. Architectural rendering by BNIM Architectes

Designing a building without knowing what materials will be used to construct it is increasingly common given the myriad uncertainties surrounding material availability and costs.

But the team at BNIM Architects rose to the challenge, delivering to their client LifeServe Blood Center an image showing how the association’s new headquarters in Johnston would fit among dozens of mature trees and offer staff, donors and to others a view of the eastern horizon.

“We wanted to be responsible, with the tree canopies that are there, and provide a site-sensitive building,” said Jeff Shaffer, architect at BNIM, located in downtown Des Moines. “At the same time, we wanted to offer [LifeServe] with a facility that meets all their functional needs and creates a space they love to work in and visitors enjoy too.

LifeServe Blood Center, currently located at 431 E. Locust St. in the East Village of Des Moines, plans to build a new headquarters in Johnston. The non-profit organization purchased over 6 acres on the northeast corner of Merle Hay Road and Johnston Drive earlier this year. The property was once home to Heard Gardens, a well-known landscaping company founded in 1928.

The group’s new facility will be two stories high and will comprise approximately 56,000 square feet of space. The donor centre, laboratory and supply area will be on the first floor. The second floor will include executive offices. Development costs are estimated at $20 million.

The south side of the building, which will feature many windows, will face Johnston Drive. The east end, which will include a balcony, will overlook vegetation and trees.

“The view will be phenomenal,” said BNIM director Rod Kruse. “You’re going to be able to see for miles, towards the city.”

The east end of the building will include the donor center and meeting and break rooms. “We wanted to give everyone the best views, which means everyone is welcome in this area,” Kruse said. “These are not executive offices. It’s not someone’s private space. Everyone can have access to it. »

Although the size and shape of the building have been determined, the materials that will be used to construct the building are not yet known.

Once a construction manager is hired, “we’ll be able to better understand material availability and get the right materials at the right price,” said Matt Brown, president of Formation Group, a consulting firm. in construction based in Johnston working with LifeServe.

Kruse said the building’s design is adaptable to the types of materials that can be used in its construction.

“That’s not how we would normally start” the design process, Kruse said. However, now that the design of the new headquarters is complete, the development team will assess the cost differences between the products available and those that will take longer to obtain.

“If you delay construction to wait for a product, you might end up with higher costs,” Kruse said. “You get to a point where you say ‘I might pay a little more now, but it might still be less than I’m paying if I’m waiting for the product that we think might be more traditionally profitable. .’ “

The building’s design will allow for future expansions if needed, said Stacy Sime, CEO and President of LifeServe. “We want to make sure that we’re not just planning a building that meets our current needs, but that it really thinks about what we might be doing in the future.”

The center will likely open in its new location in Johnston in the spring of 2024.

FRIDAY
Be sure to check out Friday’s Business Record for more on LifeServe Blood Center and the site where its new headquarters will be built in Johnston.