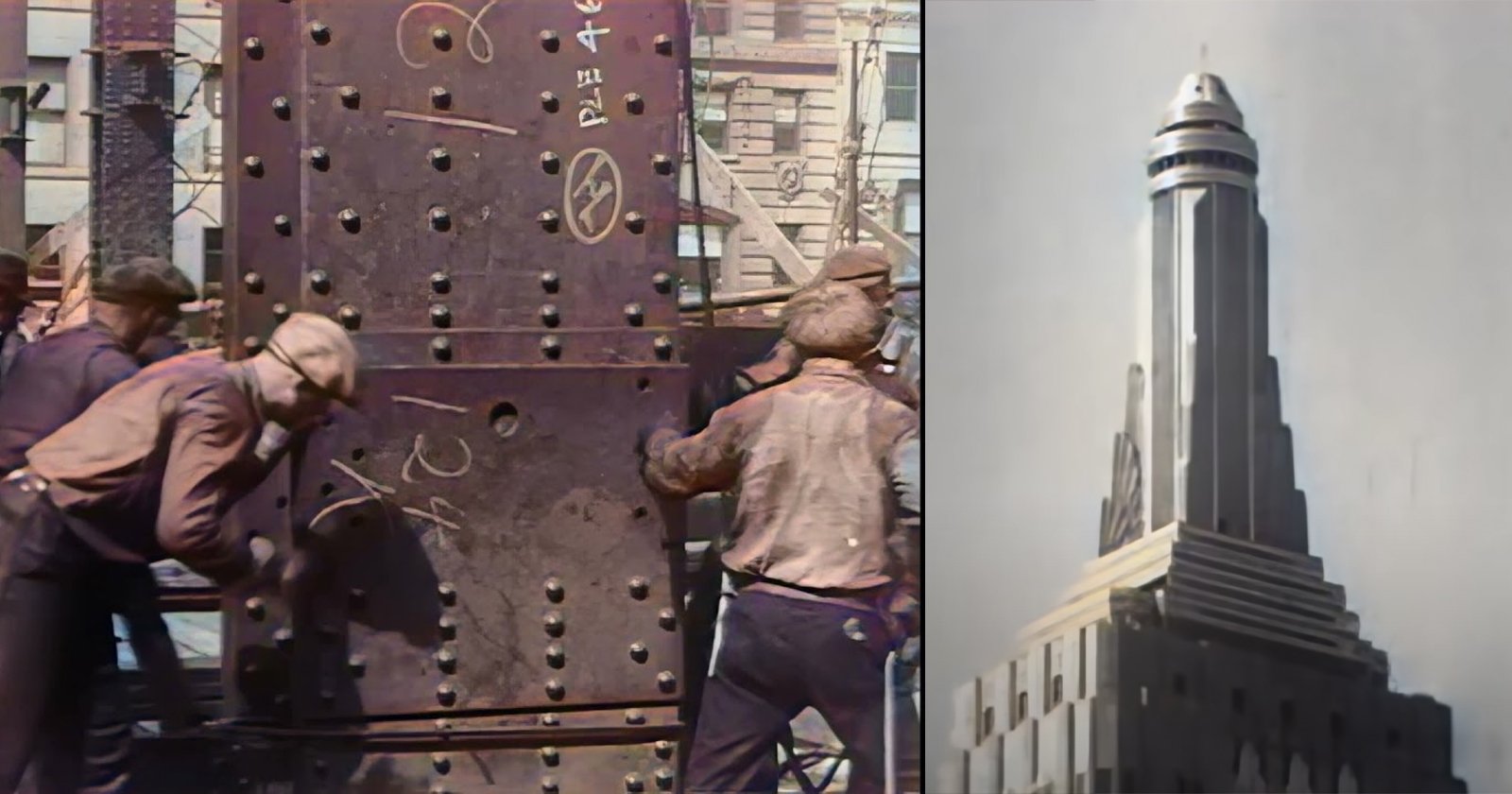 Incredible colorized sequence of the construction of the Empire State Building

By James G. WarfieldJanuary 25, 2022No Comments

A historic film restoration editor has compiled, repaired and colorized 22 minutes of nearly century-old footage that shows the construction of the Empire State Building.

Rick88888888 also known as RickFilmRestoration is an editor based in Leidschendam, the Netherlands, who has been restoring films for over 15 years. He fills his chain with historical film footage mostly from before World War II. Much of this footage was digitized with older digitizing technology which resulted in poor quality footage, but Rick says modern software is able to restore much of what was lost in this transition and to add more.

It uses motion stabilization, speed correction, noise reduction, and dust removal methods combined with other editing techniques. Rick also uses artificial intelligence software to colorize and scale the footage to allow these older films to be enjoyed by modern audiences.

Rick says his film about the construction of the Empire State Building, which was recently spotted by LaughingSquid, is a compilation of restored, enhanced, and colorized film footage that shows the construction of the building that took place nearly a century ago. It shows how the base of the building is laid, how all the parts are produced in nearby steel mills, and how the steel parts are riveted together. The film also presents the dangers of working at such high construction altitudes, especially at the time, as well as the completion of the structure.

“What many people probably don’t know is that the Empire State Building was built where the famous first version of the Waldorf-Astoria Hotel stood on 5th Avenue (opened in 1897) In 1931, the hotel reopened in a new location on Park Avenue,” Rick explains. “The Empire State Building began with the destruction of the hotel on January 22, 1930, after which the actual construction began. started on March 7, 1930. It was completed at record speed after only 13.5 months on April 11, 1931 and officially opened on May 15, 1931.”

Rick notes that the building was designed in the art deco style and was 381 meters high (1,250 feet) and had 102 floors.

“Achieving such a height was only possible through the use of a steel frame,” says Rick. “As an important symbol of New York City, the building has been named one of the Seven Wonders of the Modern World by the American Society of Civil Engineers.”

Rick cites the source of his images as Archive.org. While the clips here aren’t rare on their own as they’re publicly available, the way they appear after his edits is unusual and unique to say the least.

Some historians disapprove of colorization

Colorization is seen as a way to make historical images interesting for modern audiences and to make them easier to appreciate. Some historians, however, do not see this as an advantage.

In October 2020, several prominent historians spoke out against colorization and argued that adding color, motion, or frames takes away from the original intent of the capture. Removing dust, scratches and blemishes while adding supposed color, they said, obscures the past instead of highlighting it.

“The problem with colorization is that it leads people to think of photographs as just sort of a simple window into the past, and that’s not what photographs are,” said McKernan Emily Mark-Fitzgerald, associate professor at the School of Art History and Art at University College Dublin. cultural policy, says.

“It’s nonsense,” said Luke McKernan, senior curator of news and moving pictures at the British Library. “Colorization does not bring us closer to the past; it increases the gap between now and then. He does not allow immediacy; it makes a difference.