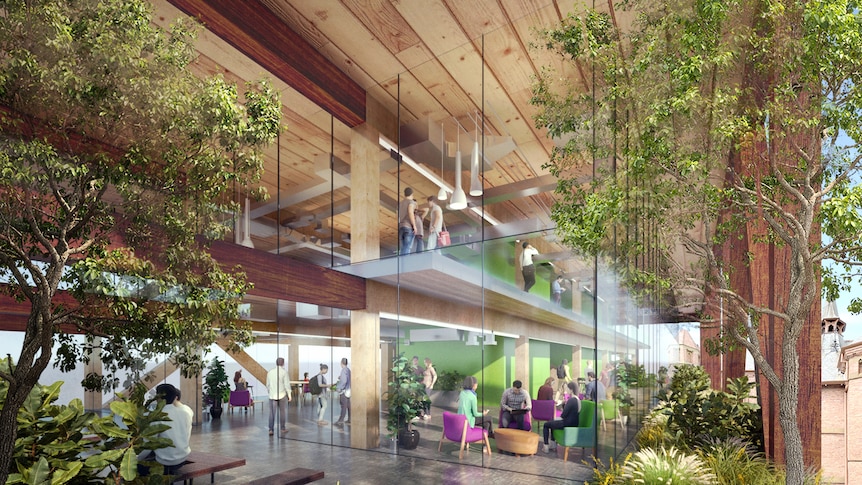 For some, the term “sustainability” means higher costs, more labor and more hassle, but while the construction industry is struggling with severe labor shortages , going green could be a saving grace.

St Lukes Health’s new headquarters in Tasmania has been touted as one of the most sustainable offices in the country, largely due to its use of engineered wood products such as cross-laminated timber and timber glulam, or glulam.

Although these products cost more than conventional materials such as concrete, St Lukes Health Chief Strategy Officer Martin Rees thinks they are worth it.

“It’s definitely a more expensive way to build right now, but the trade-off is that you can build faster,” he said.

“Also, when you go to do a landscaping, you’re leaving wood exposed, so you’re not putting caps and other coverings on top of the concrete, and that’s a savings.”

The 28-metre high St Lukes Health headquarters will rise from the brick base of a 19th century building in Launceston.

Mr Rees said they were allowing builders to build ‘about one floor a week’ once they were ‘off the ground’.

“It’s built upside down, where you don’t need scaffolding.”

Mr Rees hoped the project would serve as a proof of concept for others looking to adopt sustainable materials.

“There are a lot of advantages, especially at this time when it is difficult to have concrete workers and steel workers.”

Master Builders Tasmania managing director Matthew Pollock said the industry was willing to consider ‘anything’ to cut the workforce, especially amid fierce competition for workers in an industry booming mining.

“Skills shortages in construction have been an acute problem for several years, then worsened significantly during the COVID years,” he said.

“At Tassie, we estimate that to complete the pipeline of work ahead – so 30,000 new homes over the next 10 years and just over $20 billion in infrastructure – we will need to increase the workforce from 25% construction by 2025.

Mr Pollock said there was “strong interest” in decarbonising the building process, but adoption of sustainable materials was being hampered by limited supplies.

Australia already has to import timber for construction and the country is far behind the most advanced engineered wood industries in Europe.

“It’s an industry in its infancy [in Australia]but it’s a fantastic product,” Pollock said.

“One of the silver linings of COVID is that companies are looking for local producers and local supply chains that aren’t exposed to the kinds of international disruptions we’ve seen over the past two years.”

A sea of ​​new materials

Designers and developers who want to decarbonize their projects often have to navigate a tangle of emerging materials, each with their own environmental attributes.

Regenerative practices co-ordinator Adrian Taylor of the architectural collective BVN said it was not possible to simply swap a high-carbon product like concrete for wood.

“They don’t work the same way,” he said.

Mr Taylor also said that some materials take “a lot of effort” as they require various different certifications.

But he said initiatives such as Architects Declare help industry pool research and resources to ease the individual burden of embracing sustainable building.

“In any kind of industry that runs on creative intellectual property (IP), people have the cards close to their chests,” Taylor said.

“But because everyone wanted to be on a survivable planet, there was a lot more effort to share information.”