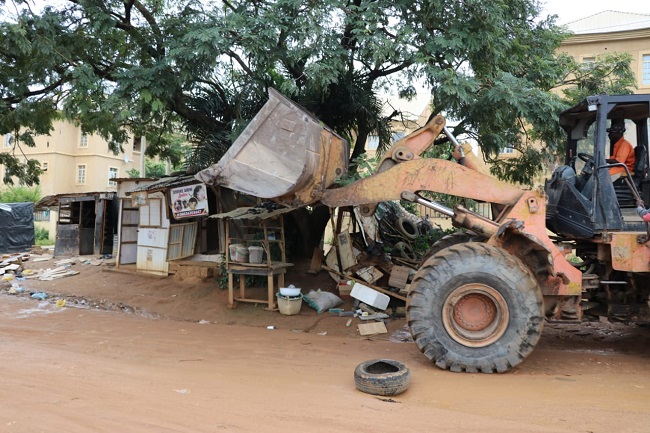 For allegedly encroaching on road corridors and being a public nuisance, municipal management officials from the Federal Capital Territory Administration (FCTA) raided and dislodged craftsmen and building materials dealers by the hundreds from the main streets, in the Karmo district of Abuja, the national capital.

In particular, FCTA officials, backed by security personnel from the Nigeria Police Force and the Nigeria Security and Civil Defense Corps (NSCDC), over the weekend dismantled shacks and removed items such as furniture. and scaffolding, ladders among others in the area.

It was observed that most of the artisans and traders affected were those who had hitherto operated in makeshift structures, mainly containers and batchers attached to the perimeter fence of the Babangida estate, near the Nizanya hospital, in the district of Karimo.

A cluster of roadside traders were also affected on the section of a major road corridor linking the district to Idu railway station and the junction along the busy Jabi/airport road.

Galadima, who has called the conversion of major road corridors into commerce and other ancillary activities unacceptable, insisted that the department, in collaboration with other sister agencies, will not let up on the reinvigorated effort to enforce the order in the city.

He said: ‘When you go around you will see that where the government has spent so much money providing infrastructure, unconcerned citizens will go and deface it with some commercial activity.

“As a result of the COVID-19 outbreak, a lot of things have stopped (pulsed), so even our weekend activities have been stopped, but now we are restarting them. Before that, most of the time on the weekends we would go around and remove construction waste and such.

“We restarted last week, in Kafe district, and this week we were in Karmo district. Thus, we see the operation as an opportunity to clear the trees as well as remove these traders and artisans from the road corridor. It’s not that we don’t appreciate what they do, but it’s not the best (designated) place for such activities”. He stated.

The FCT Minister’s Senior Special Assistant for Monitoring, Inspection and Enforcement, Ikharo Attah, who led the team, said the administration will not stop Nigerians from migrating and living in Abuja, but that illegal structures cannot disfigure the city.

He said: “The influx of people is responsible for the increase in slums, they even take over the streets. People who come to Abuja can stay in the suburbs rather than coming to places where they live under trees and bridges everywhere. We will not tolerate this.

“We are conducting this exercise because we received a lot of complaints over the weekend. And as you can see, shacks started popping up from the community all the way to the Maitama crossroads.

“That’s why we had to come and clean them up quickly because they serve as a haven for criminals. Criminals hang around in these shacks to attack the neighborhood. He said.