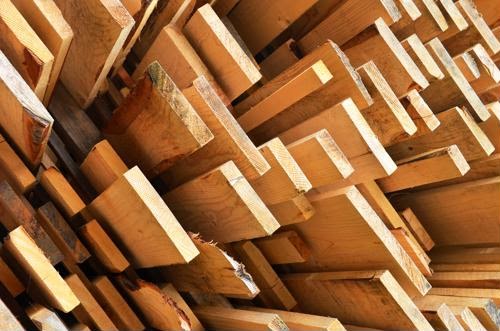 Cost of wood, building materials on the rise

After five straight months of decline, lumber costs appear to be on the rise as home builders head into winter.

Softwood lumber prices rose more than 9% in October on a seasonally adjusted basis, according to the most recent Producer price index published by the Bureau of Labor Statistics. This is the first monthly increase in lumber since May.

Lumber is one of many commodities experiencing dramatic price growth, in large part due to limited quantities of these products. According to the Institute for Supply Chain Management, prices rose for more than two dozen commodities in October, including adhesives, aluminum, copper, corrugated board, diesel fuel and electrical components, as well as pallets and steel.

Prices for building materials as a whole also climbed, but not as much as softwood lumber, which is primarily used for interior moldings, frames and windows. As the National Association of Home Builders has pointed out, the cost for Ready mix concrete, gypsum and steel products all rose in October from August, up 0.6%, 2.1% and nearly 5%, respectively. And since the start of the year, prices for these construction products have skyrocketed, nearly 117% for steel products.

What drives wood prices up?
Several factors appear to be contributing to price pressures. One is the high rate of home buying and the speed at which newly listed properties are purchased. In October, sales of existing homes totaled about 6.3 million on a seasonally adjusted basis, according to the National Association of Realtors. Over 80% of the homes listed in October were sold in a month or less.

Another factor is the amount of lumber that builders end up using with each construction project. For example, according to the National Association of Home Builders analysis of quarterly housing starts data released by the Census Bureau, the median square footage of a single-family home completed in the third quarter was 2,337 square feet. This is an increase from 2,299 in the second quarter and 2,273 in the third quarter of 2020. Average square footage also increased, totaling 2,541 square feet compared to 2,540 in the second quarter and 2,479 in the last quarter. corresponding period of last year.

Chuck Fowke, chairman of the NAHB, warned that the move would make the predicament even more difficult for developers as well as home buyers.

Senators from New Hampshire and Kansas have since contacted Commerce Secretary Gina Raimondo, urging the Department and the Biden administration to reconsider their decision.