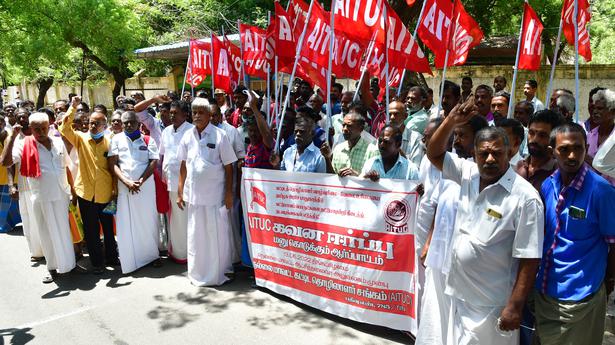 The Association of Construction Workers of Tirunelveli District, affiliated to AITUC, asked Collector V. Vishnu to take the necessary measures to control the prices of construction materials by ensuring sufficient availability in the market.

After staging a protest for some time in front of the Collectorat, the construction workers filed a petition.

The petitioners said the cost of construction materials such as cement and steel have severely affected the construction industry, leaving many laborers out of work in recent months. The severe shortage of building materials like river sand, M sand, brick, blue metal, etc. made the situation worse.

“Even though the government of Tamil Nadu had issued a government decree on the opening of river sand deposits in the district, no action has been taken by the authorities to open the quarries. If the sand quarries are opened by the government as previously announced, those who build their houses will submit the construction plan approval and the fee for the sand to take the sand from the river of the deposits. As the government has created an artificial demand for river sand by delaying the opening of depots, builders have to rely on M-Sand which is also not sufficiently available. Therefore, appropriate measures must be taken to open the quarries and river sand deposits to sell the sand to the public,” said R. Sadaiyappan, District Chairman, Tirunelveli District Construction Workers Association.

The association’s district general secretary, MS Balakrishnan, said the state government should sell off the stones, blue metal and M-Sand by taking over all the quarries to control the soaring prices of these materials from construction.

They also said that brick and tile kiln manufacturing units should be allowed to take clay from dry water bodies so that these products are adequately available in the market.

A Maideen Fathu from Melapalayam has submitted a petition asking for the early release of her son who has been in Palayamkottai Central Jail for 23 years after being convicted in a murder case. Ms Fathu said her son D. Siddhique Ali, who was arrested in 1999 in a murder case, was sentenced to life imprisonment by the Magistrate Court which was later upheld by the High Court and the Supreme Court.

While serving a life sentence, Mr. Siddhique Ali was released on parole for two days and married a daughter.

“Since my son has been in prison for 23 years after being convicted in the murder case, he can also be released like the convict for the murder of Rajiv, AG Perarivalan. Therefore, the collector should recommend the government to free my son,” Ms. Fathu said.